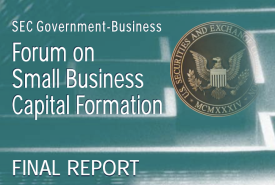 After only seven (7) months the “SEC Government-Business Forum on Small Business Capital Formation” recently released its final report from its November 21, 2013 meeting. Despite what seems like an unnecessarily long wait, the report holds some very solid recommendations regarding crowdfunding and crowdfunding regulations.

For those that do not know, since 1982 the Securities and Exchange Commission (SEC) has hosted an annual forum focusing on the capital formation concerns of small businesses. The forum provides a platform for participants to identify and discuss current impediments in the small business capital market and to formulate recommendations for overcoming them.

Last year’s forum was particularly interesting given the number and diversity of entrepreneurs and advocates who attended to voice their opinions regarding the various provisions of the JOBS Act. If one theme is clear from the final report, it’s that the attendees felt that the “impediments” to the usefulness of the JOBS Act was coming from the overregulation of the Act by the SEC themselves.

The crux of the final report spans about eight (8) pages and sets forth forty-three (43) separate recommendations (some in multiple parts). The recommendations are presented in the order of perceived importance by the forum attendees and without going into detail on each recommendation, I believe some of them deserve particular highlighting:

The above recommendations, as well as many others presented in the final report, echo the sentiments that many of us in the crowdfunding industry have held for some time. Whether the SEC will ultimately choose to act on any of these recommendations or simply 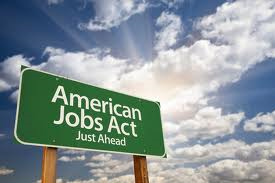 file this report away with the numerous public and private sector comment letters it has received since the enactment of the JOBS Act remains to be seen. What is clear is that reports like this are necessary in order to keep the SEC’s eye on the ball and remind them that the JOBS Act was intended to improve small business capital formation, not to impede it by overregulation.